A purge of editorial management at regional newspapers owned by Polska Press has gathered pace in the last month, as the shockwaves of the controversial takeover of the publishing house by Poland’s state-controlled oil giant PKN Orlen continue to be felt.

A total of eight editors-in-chief have now been dismissed or pushed out since Orlen acquired the publishing house in March, with other editors and journalists at Polska Press titles across the country resigning in recent weeks.

Their dismissal and replacement by numerous journalists arriving from the state-controlled public broadcaster Telewizja Polska and other pro-government media has heightened fears that a Hungary-style takeover of regional media is now underway in Poland.

The accelerating editorial changes come despite a ruling made by a competition court in Warsaw in April which suspended regulatory approval of the acquisition by Orlen while an appeal brought by the country’s human rights ombudsman Adam Bodnar is examined.

Despite instructions by the District Court in Warsaw for Orlen not to make any personnel changes in the management board, Orlen began to dismiss members and replace them with its own appointments. It has now changed the entire management structure.

Among those appointed to the influential oversight board was Dorota Kania, a pro-government journalist and former editor-in-chief of editor-in-chief of Telewizja Republika. In mid-May, a new Polska Press president with experience overseeing pro-Law and Justice (PiS) media and state owned-companies was appointed following a hiring process in which candidates were given just four days to submit their applications.

After Oren took over, newsrooms received letters from the oil conglomerate assuring them that editorial independence would not be affected, while the company’s CEO, Daniel Obajtek, explicitly promised journalists there would be no layoffs at Polska Press titles.

These pledges proved to be short lived. In late April, Obajtek backtracked and said that the owner had the right to make “certain personnel decisions in managerial positions”. In April, three editors-in-chiefs at Dziennik Zachodni, Gazeta Codzienna Nowiny and Gazeta Krakowska were dismissed and replaced with figures with clear links to pro-PiS media outlets or TVP.

More changes followed on June 1, with editors-in-chief at Gazeta Wrocławska, Głos Wielkopolski, Gazeta Lubuska and Polish Metropolis of Warsaw all dismissed. The same day it was also announced that the editor-in-chief of the Gazeta Pomorska, Express Bydgoski and News Dziennik Toruński would be leaving.

While some of these editor-in-chiefs left by so-called “mutual agreement” – shorthand for a diplomatic dismissal – others resigned themselves or were shuffled to other positions within the newspapers. Orlen has attempted to stress that employees left voluntarily, however it has also refused to make details of the severance pay public. Many of the replacements have experience working in the state broadcaster or other pro-PiS media.

Polska Press is one of the country’s largest media companies, owning 20 regional dailies, 120 weekly magazines and 500 online portals across the country. 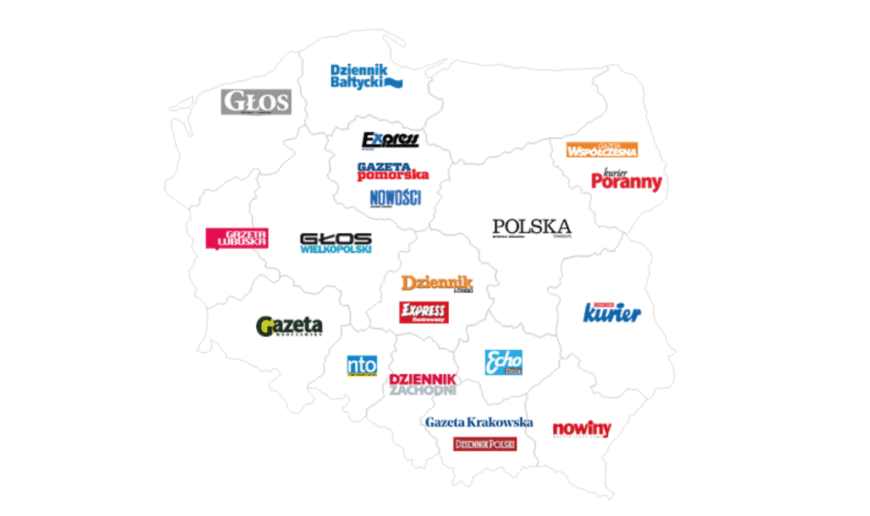 Analysts and Polish media experts have described the managerial and editorial changes as a conservative coup at the publishing company. At best, experts suggest, soft censorship will pressure newspapers to dampen criticism and slowly encourage reporting favourable to the government. At worst, they could now be deformed into propaganda mouthpieces of the PiS.

Either way, the changes have illustrated concerns raised by media freedom organisations including IPI that Orlen ownership would lead to a purge of critical journalists akin to the takeover of the public television and radio at the start of its first mandate in 2015. Further editorial changes at Polska Press titles are now expected to follow.

This state-led capture of local media mirrors the efforts undertaken by allies of Hungarian Prime Minister Viktor Orbán’s Fidesz party in 2016 and 2017 to buy up regional publications, often from foreign owners, as in the case of Polska Press. There too, acquisitions by politically connected owners led to meddling and an exodus of journalists who were dismissed or quit, after which the editorial line was flipped. Virtually all regional media in Hungary are now under the control of the Fidesz party and its allies. Experts have frequently noted that access to independent news in areas outside of Hungary’s largest cities is now heavily limited.

Unlike in Hungary, where government-friendly businessmen were used to snap up media outlets, in Poland the government has instead relied upon the state-controlled oil company headed by a PiS loyalist as its economic engine for buying media.

The takeover of local media in Poland has also been timed for political reasons. In 2023, Polish voters will go to the polls in tightly contested local elections in which PiS is determined to wrestle back control over urban centres. Friendly coverage at Polska Press’s 20 regional dailies and 150 weeklies could provide a valuable campaign tool during the electoral race for shaping public opinion.

On a broader level, Orlen’s acquisition of the publishing house from the German Verlagsgruppe Passau Capital Group is part of PiS’s multi-year efforts to establish greater political control over the private media sector and push foreign capital out of the domestic market, as outlined in a report by the Media Freedom Rapid Response (MFRR). Labelled “repolonisation” and framed as an issue of national sovereignty by the government, these efforts are aimed at cementing more indirect control over the media landscape ahead of elections.

Who is afraid of journalists?…

Albanian ‘Ministry of Propaganda’: Where…

Greece: Letter to government after…